Proposal to Eliminate Registry IT Technology Department- A Disaster

County Consultant Abrahams - Not an IT Security Expert

From Cursive to Computer 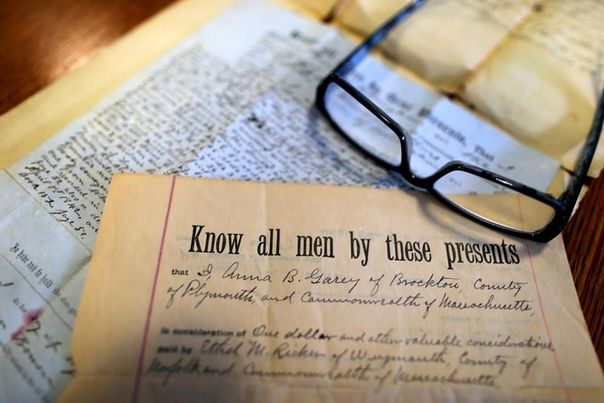 The Norfolk County Registry of Deeds is nearing completion of a project to transcribe handwritten land records from 1793 to 1900. Here are two old handwritten deeds on Register of Deeds William P. O'Donnell's desk.

In August 1822, John Adams, the nation’s second president, donated several pieces of land to his hometown of Quincy, including two pastures, several cedar swamp areas, and an 8-acre parcel that included the site of a former house built by John Hancock’s father.

The details of the 86-year-old Adams’s gift, including his condition that a school be erected over the cellar of the old Hancock home, are contained in the land document he recorded in a personal visit to the Norfolk County Registry of Deeds. Thinking ahead to his envisioned school, the elder statesman wrote, “I hope the future Masters will not be presumptuous if I advise them to begin their lessons in Greek and Hebrew by compelling their pupils to take their pens and write over and over again copies of the Greek and Hebrew alphabets.”

But anyone studying the nearly 200-year-old deed today might not be able to easily glean those reflections by Adams or the other particulars of the document. Handwritten in the flowing cursive style of the day, the densely-packed words are a challenge to read.

Now a nearly completed initiative by the Norfolk County registry is promising to make it much easier for modern readers to decipher the contents of the Adams deed and other old land records. In what officials say is the first project of its kind in New England, the registry in Dedham is transcribing into type all the county’s handwritten deeds from the time of its founding in 1793 to 1900, when the office switched to typing its documents.

More than 250,000 deeds will have been transcribed by the time the two-year effort concludes in April, according to officials at the registry and Xerox Corp., which is undertaking the $2 million project.

All the transcriptions are accessible free of charge to the public, posted with the existing land records on the registry’s website.

“Our mission is to enhance Internet land record research,” said Norfolk County Register of Deeds William P. O’Donnell, a Norwood Democrat. “So by transcribing these handwritten documents, we believe we are doing a service to lawyers and title examiners that look at these documents.”

O’Donnell said the transcriptions would also prove to be a valuable time-saver for historians and genealogists.

Manually transcribed into computer text documents by a team of about 20 Xerox workers, the papers chronicle more than a century of land transactions starting with a 1793 deed in which three men agree to a division of land in Foxborough. A number of deeds involve historical figures.

In addition to the former president’s gift, the Adams family is featured in another document, an 1803 deed in which John and Abigail Adams transfer land in Quincy to their son and the future president John Quincy Adams. According to the record, John and Abigail conveyed the Norton Estate property “in consideration for one dollar paid to each of us” by their son.

Among other transactions, an 1801 deed records a $4,000 land purchase in Canton by Paul Revere. The property, identified by such landmarks as “the small Elm Tree on the Southside of the East branch of Neponset river,” contained a former gunpowder mill that the Boston silversmith and Revolutionary War patriot converted to a copper rolling mill, according to Kristin Pezka, interpretation and visitor services director at the Paul Revere House in Boston.

Horace Mann acquired property in his native town of Franklin in 1825, according to a deed recorded that March. The renowned educational reformer, then residing in Dedham, bought the land for $75 from someone named Elias Mann.

John Anderson, president of the Walpole Historical Society, said his organization uses registry records on occasion when doing historical research or assisting families in tracing genealogy. He said having access to the transcriptions is a big help.

“I’m not good at reading it,” he said of the handwritten documents. “You have to study it because it kind of looks like old Greek to me. If it comes up in transcribed type, it will be much easier to read and to refer to.”

O’Donnell said the project follows other modernizing initiatives his office has taken to “bring registry records into people’s homes and businesses.” They include posting all records online, a step other registries have also taken.

He said his interest in preserving the county’s past gave him the idea for the transcription project. The venture got underway in May 2014 after he secured a grant from a state technology fund derived from registries of deeds’ fee revenues.

“I saw we have a lot of history here in Norfolk County, and it’s tough to make that rich history come alive if you can’t read the documents,” O’Donnell said.

Many of the deeds offer a window into the events and personalities of the times.

In deeding his land to Quincy, for instance, John Adams expresses admiration for his late fellow patriot, John Hancock, who according to Adams was born in the old Hancock home on the site. Adams recalls Hancock as “that great, generous, disinterested, bountiful benefactor of his country once President of Congress and afterwards Governor of this State whose great exertions and unlimited sacrifice this nation is so deeply indebted for her independence and present prosperity.”

O’Donnell said the transcriptions will not only help today’s readers but also could be essential in the future “when many people may not even know how to read cursive.” Until 1900, all records presented at the Norfolk County registry were copied by hand by office “scriveners” and then placed in the official registry books.

Because the state grant was not enough to transcribe all pre-1900 registry records, the registry confined the project to deeds. With future funding, O’Donnell says he hopes to transcribe other records, such as mortgages.

The Xerox workers involved received special training to help them understand the old handwriting, a skill that was sharpened as they worked on the documents.

Xerox provides document transcription and other services for local and county governments. But this marks the first time the Connecticut-based firm has undertaken a deeds project of this type, said Lou Schiavone Jr., managing director of its Local Government Solutions division.

“It’s not something we do on a normal basis,” he said. “What made it fun is the fact this is historical.”

Peter Zahka, a Dedham lawyer who specializes in zoning and land use, said the transcriptions will help him in his work.

“There are times when I need an historical perspective” on properties, he said. “And when I go back to these records ... they have a very flowery type of handwriting that looks nice but to say it’s difficult to read would be putting it mildly.”

“We typically go back 50 years, but sometimes you have to go back into the 1700s or 1800s,” he said of title searches. “The cursive writing can be very difficult to read. This type of thing for us is really helpful.”

John Laidler can be reached at laidler@globe.com.