Proposal to Eliminate Registry IT Technology Department- A Disaster

County Consultant Abrahams - Not an IT Security Expert

From Quill Pen to Pixels 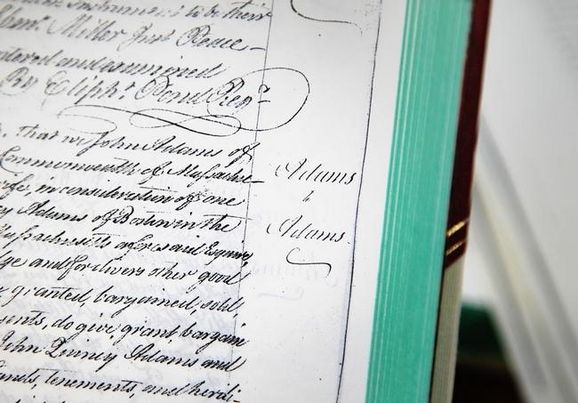 From Quill Pen to Pixels

transcribed to make them easier to read

QUINCY – When Paul Revere purchased a piece of land along the Neponset River in Canton in 1801, the boundaries of the plot included a small elm tree, an apple tree and a heap of stones. John Adams made his wishes known when he gave the “town of Quincy” several pieces of land in 1822, including 8 acres in what is now Quincy Center. On this site, the nation’s second president wanted “a stone school house” built over the cellar of the birthplace of John Hancock. That place became the Adams Academy.

In the deed, Adams included a tribute to Hancock. The deed describes Hancock as “that great, generous, disinterested, bountiful benefactor of his Country once President of Congress and afterwards Governor of his State whose great exertions and unlimited sacrifices this nation is so deeply indebted for her independence and present prosperity.”

These handwritten documents are among the earliest land records of Norfolk County, which was founded in 1793. And while they are available in book form at the Registry of Deeds in Dedham and online, documents written with quill pens don’t transfer well to modern computer screens, Register of Deeds William O’Donnell said.

“It’s very difficult to read this, and we’re trying to make it easier,” O’Donnell said, pointing to one of the deeds.

The registry is midway through a transcription project that will convert a quarter of a million handwritten deeds into easy-to-read text.

The deeds are from the period between 1793 – the year of the county’s creation – and the end of 1899. The registry switched to typewritten records at the start of the 20th century.

“Our goal all along has been to bring the registry into people’s homes and businesses,” said O’Donnell, who has been register since 2002. “We’re trying to make history come alive for people, and you can’t do that when you can’t read the handwriting.”

In addition to being the records of land transactions, the records are useful for historical and genealogical research, he said.

And some of the deeds contain more than just the information about land transactions. Some list the household possessions and livestock that changed hands as parts of the deals. Some give the occupations of the parties, O’Donnell said.

The transcription project is being paid for with a $2 million state technology grant. A team from Xerox is doing the work.

And while the transcribers do their best, the accuracy of the transcribed documents isn’t guaranteed. That means the handwritten records will be the only ones considered official, O’Donnell said.

The products of the transcribing are considered “a convenient reference for registry patrons,” O’Donnell said.

O’Donnell said the Norfolk County registry is the first in the state to undertake a project of this kind. He expects others to follow suit.

In 1803, John Adams sold son (and future sixth president) John Quincy Adams 108 acres “situated on the plain below Penns hill,” the area of the Adams birthplaces. The deal included “three Houses, three Barns and other buildings upon it.” The price: $12,812.

The 1822 deed also contains some of John Adams’ ideas on education. It says schoolmasters should teach students Greek and Latin and the basics of Hebrew, and that students should be required write the letters of the Greek and Hebrew alphabets “over and over again until they are perfect masters” of those alphabets.

The deed also indicates that the boundaries of Braintree and Quincy may not have been settled in the minds of the public after Quincy formed its own municipality in 1792.

Adams wrote that he had thought the two pieces of land were in Quincy, but “I now am informed (they) are in Braintree.”